We Refuse to be Enemies

We Refuse to be Enemies


How Muslim and Jews can make Peace, One friendship at a time.

The Muslim and Jewish co-authors of a book promoting Muslim-Jewish friendship and trust appealed directly to members of their respective communities to “stand together to protect democracy, pluralism and religious liberty in America.”

Addressing a zoom forum co-sponsored by the Interfaith Institute of the Islamic Center of Long Island (ICLI) and Temple Or Elohim, A Community Reform Congregation, the speakers, Sabeeha Rehman and Walter Ruby, whose book We Refuse to be Enemies. How Muslims and Jews Can Make Peace, One Friendship at a Time (Arcade Publishing. April 2021), argued, “As members of the two largest minority faith communities in America, we must stand together at a portentous moment in American history. Neither of our communities will be able to prosper in an America characterized by xenophobia and bigotry.”

Rehman and Ruby, who have worked to strengthen Muslim-Jewish communication and cooperation since 9-11, believe that Jews and Muslims are natural allies who share a great deal including common Patriarchs and Matriarchs, and shared principles at the core of both faiths, including: ‘If You Save One Life, It Is As If You Save The World’; ‘Welcome the Stranger’; ‘Tikkun Olam and Islah—the common moral imperative to help those in need; and ‘Standing Up for the Other’.

Yet they acknowledged the roadblocks to Muslim-Jewish solidarity: the longstanding differences over the Israeli-Palestinian conflict. They argued, American Muslims and Jews cannot afford to let the conflict drive us apart, especially at a time when our collective well-being in America is at stake. We can agree to disagree respectfully, even as we contribute together to humanitarian efforts to save lives and improve the quality of life for Palestinians and Israelis alike.”

Rehman and Ruby shared their respective life journeys during which they were able to overcome longstanding biases. Rehman explained that growing up in Pakistan until the age of 20, she had never met a Jew and viewed Jews through the lens of the middle-east conflict; a viewpoint replicated in reverse by Ruby; who grew up in suburban Pittsburgh and for an extended period in Israel with a deeply negative perspective on Muslims and Arabs. They shared fascinating anecdotes about how their perspectives shifted as Sabeeha found herself “living in an Orthodox Jewish community on Staten Island and being attended by a Jewish obstetrician during her first pregnancy; while Walter spoke of sipping coffee and discussing politics with Palestinian Arabs as a young journalist and witnessing Yasser Arafat deliver the Palestinian Declaration of Independence. Ruby and Rehman spoke of their work in Muslim-Jewish relations, and of the eight-point roadmap they have developed for moving forward, that begins with: “We are Americans first. While the Israeli-Palestinian issue matters greatly, we live here, not there, and our collective well-being is at risk unless we stand up for each other and unite, together with other Americans dedicated to enhancing democracy and pluralism’

According to Laurel Fried, Vice President of Temple Or Elohim, A Community Reform Congregation, and moderator of the forum; “Together with the Interfaith Institute, we were proud to sponsor this timely event, which powerfully made the case for Muslim-Jewish and Interfaith solidarity.” Dr. Faroque Khan, founder and president of the Interfaith Institute of ICLI, and a pioneer in Muslim-Jewish relations going back to the early 1990’s, commented, “Now more than ever, Muslims, Jews and interfaith allies need to come together and stand up for core American values that sustain us all.” 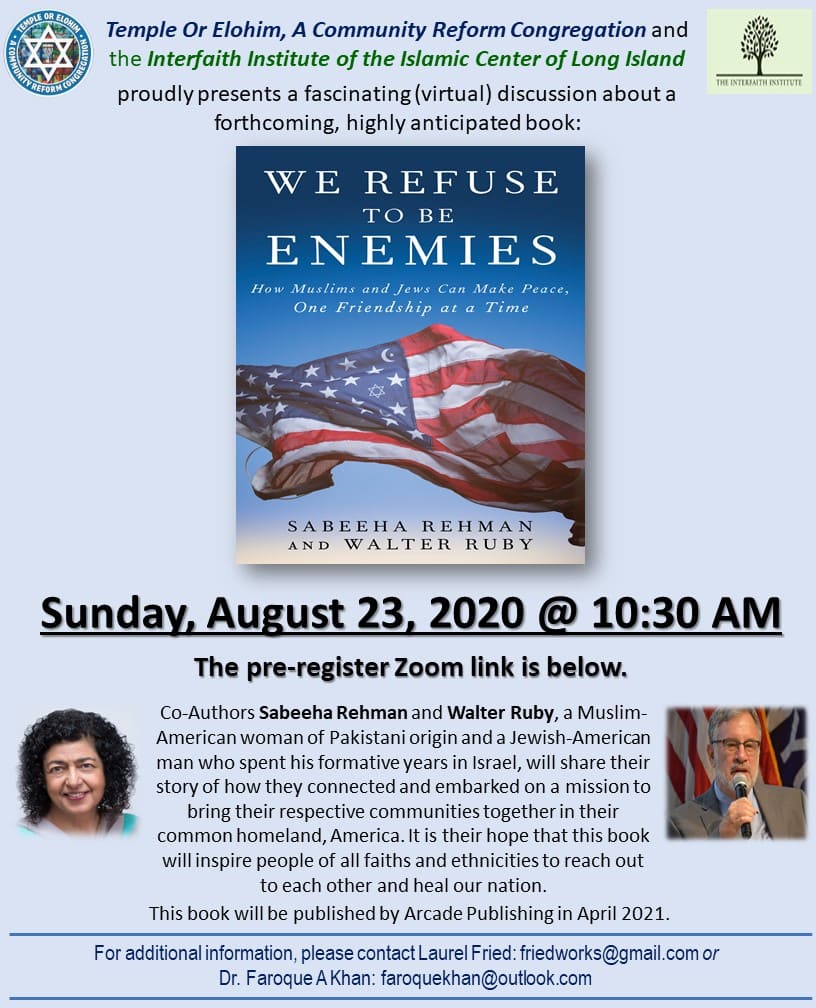